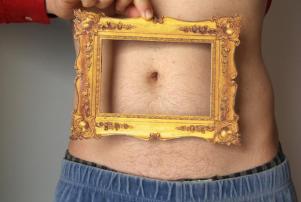 First off, I think it merits mentioning that in looking for pictures to use for this post, I was so nauseated by the images that came up in my search (close-ups of belly buttons, thick pieces of lint and the like) that I seriously debated getting rid of this feeling entirely.

Then, I scratched my own belly button and found a piece of the shirt I was wearing and all was resolved.

There’s actual studies on how this even happens at all. Seriously, this guy dedicated three years to studying this “phenomena”. I mean… what is the joke for that? Honestly? A man dedicates three plus years to studying fucking belly button lint. Low-hanging fruit doesn’t even begin to describe this.

Anyway… I don’t know why or if I’m the only one who finds a bit of weird satisfaction out of getting a nice rip out of the ole belly button. Maybe it’s the cleanliness of it? I don’t know, but I know I like it.

Polar Opposite of this Feeling?: Finding out your significant other has an outie belly button and having to tell them you can’t see them any longer.