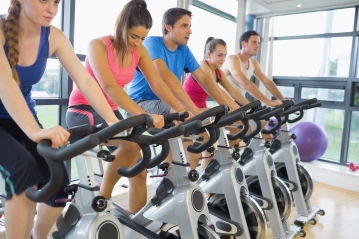 Let’s be fair… gyms are meat markets. Sure, places like Planet Fitness (where I’m a member, I’ll admit) and other similar setups purport to be judgement-free zones.

And while they are, to varying degrees, all gyms are dens of judgement.

You’re judging yourself, that’s why you’re there in the first place. You’re judging the person next to you, that’s how you motivate yourself.

The feeling I’m talking about is when you’re at the gym judging away and you happen to notice that girl or that guy cross your field of vision. Let’s say you’re on a treadmill and they happen to take up residence on a machine just far enough away that you can lazily stare but not close enough that what you’re doing is obvious.

And so you continue doing your reading or your TV-watching or your phone-surfing, all the while sprinkling in a few subtle stare sessions.

I don’t need to get into the specifics of why this is a fun thing to do, I think we all get it. I will say this, however, as a man with regards to women: I think, and I could be wrong, that a lot of women have the mistaken sense that they are at their least attractive at the gym. Workout clothes, sweaty, no makeup, hair up in a ponytail. I can’t speak for anyone outside of myself, but I can say for me, that’s perhaps the most attractive state.

So let’s not lie to one another: we’ve all played the game, without obviously staring. It’s a stealthy game with a far-higher risk than reward because getting caught is at minimum embarrassing and at worst a serious problem.

But we all trudge on, catching a glimpse of that girl or guy on the treadmill, lifting weights, doing whatever it is those machines do… and we move on with the rest of our day.

Polar Opposite of this Feeling?: Getting caught. For real. Total nightmare scenario. Best version of this feeling, the actual feeling, is taking a quick look, enjoying yourself for a sec and moving on. You don’t talk, you don’t engage, you just keep it moving. The opposite? It becomes a thing.