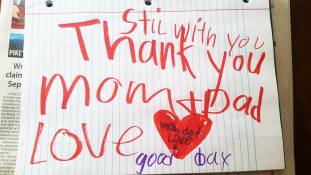 This one fluctuates, of course, based on the type of note you’re discovering.

Whatever it is, it’s rare. It’s not like you’re consistently digging through your old crap and coming across these things. At times in your life when change is occurring, you tend to find ’em. Maybe you’re moving desks at work (or simply packing up your shit because you got canned). Maybe you’re moving out of your apartment or helping a family member move out of theirs.

Either way, it’s more the emotion and nostalgia that makes this feeling so great than it is the discovery of the note itself. I honestly do fear that as we get further and further away from the written word, this sort of thing will cease to be recognizable to younger generations. Nothing will ever be lost or hard to find if it’s on your computer, so nostalgia as we know it won’t be the same.

Enough of the hard-line serious stuff… sometimes it’s just funny to see your old handwriting and what you thought was important years ago.

Like, say, betting actual money that Darko Milicic would have a good season. Ever.

Polar Opposite of this Feeling?: Discovering some sort of audio recording of someone that’s passed away or that you no longer are in contact with. Maybe an old voicemail of a forgotten girlfriend. In general, for me at least, the audio always hits harder, sadder.